This conclusion was reached by a group of specialists including
representatives of 16 institutions from different countries. Their leader
Dr. Rimma MacLeod spoke. Findings from a successful study
scientists published the journal Scientific Reports.

According to statistics, every third resident of our country
the planet is infected with Toxoplasma (Toxoplasma gondii). This is a parasite
able to affect the development and development of the nervous structures of the fetus,
whose mother was sick with toxoplasmosis during pregnancy. Moreover,
annually the number of infected people with this parasite only
increases. And together the number of cases of defeat increases
brain and eyes.

Previously, scientists conducted their experiments on laboratory
animals (mice and rats), infecting them with a parasite. As a result, the rodents are not
able to adequately respond to cats. Usually the smell of urine
�”Predators” mice perceive extremely cautiously. Here rodents are not
sensed that smell, therefore, became extremely vulnerable
carriers of toxoplasma. If a cat becomes infected with this parasite,
she will be able to isolate as many as 500 million oocysts in a couple of weeks. AND
Oocysts trapped in soil or water are dangerous to humans for a whole year.
Even primates in the course of such studies could not smell
leopard excretions.

Dr. McLeod’s international group attempted to find a similar
action of the parasite in humans. Scientists have paid attention to
the relationship between: 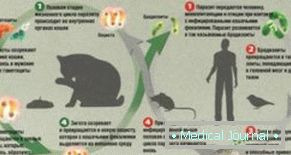 In the experiment, researchers used case histories 246
patients with toxoplasmosis (Chicago). They found certain
biomarkers (proteins specific for this parasite). It turned out that
the biomarkers found in infected subjects coincided with those
that have been found in neurological patients (Parkinson’s disease,
Alzheimer, etc.).

Toxoplasma can also “manage” twelve olfactory
nerve endings, increases the risk of epileptic
seizures are associated with a number of gene mutations leading to
oncological process.

All information obtained in the course of this work may be
useful in the development of prevention of neurological disorders.
Now it is advisable to try to avoid infection.
toxoplasma in their daily life.