Эксперты из �”Roskontrolya” установили: соленые огурцы из магазина
rich not only in salt, but also in copper. In addition, from 5 tested
marks of 3 were included in the “black list” due to the content of preservatives, and 2
– to the list with comments:

In cucumbers “FEG”, “Agroprod / Kvashenka” and “Every Day” revealed
preservative sorbic acid, not specified in the composition. it
violation of the rules. Almost all brands, except “Agroprod /
Kvashenka “, had a high copper content, which could get from
containers or from copper-containing fertilizers. The standard content of copper in
Cucumber is now canceled.

Nitrates did not exceed the norm for cucumbers grown in greenhouses,
and among the cucumbers from open ground, the mark did not pass
�”Everyday”. 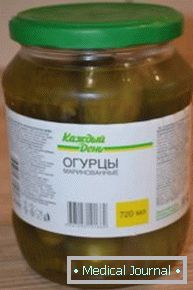 All cucumbers tested for salt content. According to the standard, the norm is 2.5
– 3.5%: Gostovskie cucumbers corresponded to the norm, and in cucumbers
�”Everyday” and “Red Price” salt was contained by 4.7% and 3.8%
respectively.

According to the mass fraction of cucumber brand “FEG”, “Beloruchka” did not comply
standard Instead of at least 50% in fact it turned out 45% and 43% of cucumbers
respectively.

Cucumbers “Beloruchka” and “Red Price” added to the list of products with
comments, and “Agroprod / Kvashenka”, “FEG”, “Everyday” – in
�”black list”.