Scarlet fever is a highly contagious infectious disease that
begins with symptoms of general intoxication, characteristic sore throat and
skin rash. Most often, only children suffer from this disease.
2-10 years. Essentially scarlet fever is a primary contact with
streptococcus. Therefore, in addition to angina, there is also a rash, as the primary
allergic to streptococcus. Today, the abundance of antiseptics in the home
reduced the incidence in childhood and moved it to a more senior
age. Scarlet fever pathogen is S. Pyogenes, toxigenic
hemolytic streptococcus group A. Toxins cause the development
toxic lesions of the myocardium, brain, detachment
epidermis and signs of intoxication (fever, myalgia, pain in
joints, headache, weakness, disability).
The allergic component is the body’s response to streptococcus.
Therefore, at the beginning of the disease there is a rash, and the later stages may
complicated by vasculitis.

Scarlet fever – how is it transmitted?

Scarlet fever most often occurs in people in areas of moderate
climate in the autumn-spring period. The causative agent of scarlet fever penetrates
through the mucous membranes of the nasopharynx, damaged skin, less often through
mucous genital organs. Therefore, it is considered that the main path
transmission of the pathogen is airborne, but it is not excluded
contact-household method of transmission of scarlet fever.

How is the disease transmitted:

The source of scarlet fever can be not only sick children, but
and carriers of the infection. The carriage of this group of streptococci is wide
it’s common — about 20% of the healthy population, with many
carriers emit scarlet fever pathogen long enough
period – from several months to a year.

If the child or adult is sick with scarlet fever – it means the body
first encounters streptococcus if infection occurs during
the second time, it is not scarlet fever that occurs with a rash, but just a sore throat
streptococcal (or rheumatism or glomeruline nephritis). The fact is that
antitoxic immunity is formed to any streptococcus, and
microbial only to this serotype (type of streptococcus). therefore
you can get sore throat by contracting another serotype, but this is already
there will be no scarlet fever with a rash.

The incubation period for this disease is considered to be from
several hours to 12 days. Most often it is 2-7
дней. It is believed that a sick person can infect
others since the onset of the first major symptoms. But,
It happens that a child may not recover completely, but already
will not be dangerous to others, and vice versa, after recovery
can long allocate the pathogen and be infectious scarlet fever.
The incubation period is the time when the causative agent is already
infused into the body, but the disease has not yet begun. This period
ends when the first characteristic symptoms appear.
The periods of scarlet fever can be divided into 4 stages: 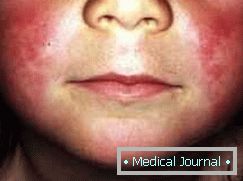 The main prevention measures for scarlet fever are early detection.
patients and quarantine – isolation of sources of infection, that is, patients.
They are isolated for 10 days from the time of the first symptoms, regardless of
the severity of scarlet fever, the same quarantine in preschool
учреждениях должен быть 2-3 недели.
Only patients with moderate and severe disease are hospitalized.
Children, after contact with the patient and not previously ill with scarlet fever, are not
are allowed in grade 1.2 and in preschool for
17 days from the time of isolation of the patient. Children from the focus of the disease,
already ill with scarlet fever are allowed in kindergartens, but under
ежедневное медицинское наблюдение сроком на 17
дней от начала изоляции заразного больного. In the apartment,
where the scarlet fever resides, the current should be held
disinfection.