Journalists from France Nicolas Daniel and Louis de Barbeirac in
for a long time trying to figure out how things are
business in the fishing industry. They visited the most popular
fish countries: Norway, Vietnam, Sweden, Denmark. The result of them
travel film appeared, showing the whole truth about the fish
production.

Initially, they went to Norway, where they talked to the inveterate
fighter for truth and justice Kurd Oddekalv. He is long
fights illegal organizations
artificial salmon breeding.

Salmon is grown in very adverse conditions and in large
quantity. This causes the fish to suffer from various diseases, and
the quality of the finished product drops significantly.

The activist has been fighting for justice for more than 10 years, collecting
various evidence. He made notes where you can clearly see how
workers in gas masks process fish with pesticides and other
chemicals, so eat this fish categorically
prohibited. Chance to get high poisoning. Kurd thinks that
salmon is the most toxic fish. At the same time fishing takes
second place in profitability after oil.

Kurd Oddekalv applies in its activities a special vessel,
equipped with spy gadgets. He studied the bottom under
farm and was shocked. There is a fifteen meter level
waste where the hotbed of bacteria and viruses. Pollution level
extremely tall. It’s like a chemical weapon that was used.
during the first world war. 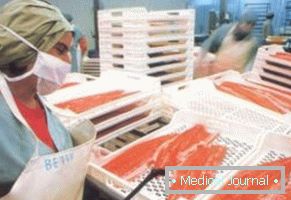 The central problem is fish louse, it actively propagates.
and is capable of ruining the fish. Therefore, workers are actively struggling with it,
using pesticides, but it’s not so easy to kill, she is very
tenacious

As a result of this treatment, the fish gets rid of lice, but when
This mutates and hurts. 50% of cod fry cannot close their mouths
and this is inherited and to get rid of it
must pass 8 generations. Nobody wants to buy such fish,
so she needs to cut off her head. Salmon also mutates its meat.
just falling apart before our eyes.

In normal wild salmon, the fat percentage is in the range
5-7%, and in such an artificially grown 15-34%. With this in
fatty tissue is deposited all toxins and harmful substances.