The complex of symptoms characteristic of acute disorders
blood circulation in limited areas of the body, called
Raynaud’s syndrome. The frequency of the syndrome is higher in countries with cold
climatic conditions. It ranges between approximately 2 and
18%. The disease often affects middle-aged people (40 – 50
years), especially women (4 times more often than men).

Manifestations of Raynaud’s disease and symptoms of Raynaud’s syndrome are very similar.
between themselves. However, they differ in the reason that prompted them
occurrence, and sometimes localization. Great value in choosing
treatment methods has a differential diagnosis.

The mechanism of development and the clinical course of the syndrome

Organic and functional disorders in
the structure of the vascular wall and the apparatus that innervates the vessels in
as a result, their nervous regulation changes. This is expressed in
bouts of pathological spasms (contractions) of vessels in response to
provoking factors which are mainly long lasting
exposure to cold, severe psycho-emotional reaction, smoking.
Localization – most often the tips of the fingers and toes, the tip of the tongue,
nose or ears, chin, patella area. Characteristic of
Reynaud syndrome of the upper extremities is the asymmetry of the lesion, and
symmetrical – more typical of Raynaud’s disease.

A significant decrease in blood flow to the tissue disrupts them.
trophism (nutrition), which is manifested in numbness and three-phase skin
reactions: blanching followed by cyanosis (blue-violet color
skin and nails) due to lack of blood and oxygen, bright
redness after the end of the “attack” as a result of a rush of blood.
Perhaps the appearance of a mesh vascular pattern. With subsequent
seizures may cause blisters with liquid, light or bloody
content and necrosis (necrosis) of tissues.

Raynaud’s syndrome, the causes of which are still not completely
studied, usually occurs when:

Unlike syndrome, Raynaud’s disease is a manifestation
diseases affecting the central nervous system at the level of the cortex
brain, hypothalamic region, trunk, spinal cord.
This leads to a violation in the centers of the formation of impulses to
vessels.

Development and provoking the disease contribute to: 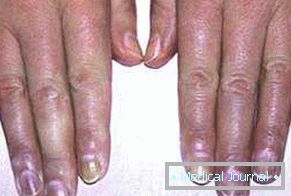 The clinical course of Raynaud’s syndrome, the symptoms of which
distributed in stages, proceeds as a progressive
process:

– the occurrence of rare short-term, lasting in
few minutes of numbness of the skin expressed by her
blanching and reducing the temperature in the affected area with
subsequent pain breaking nature. At this stage it is possible
the establishment of a provoking factor – cold (washing hands, face or
body cold water), stress, smoking. At the end of the attack
no noticeable changes to these sections are noted.

– characterized by frequent seizures that occur without visible
causes and lasting for an hour or more. At the end of the attack
develops a phase of cyanosis – appear blue-violet staining with
subsequent marked hyperemia (redness) and slight
swelling of the affected area.

– Dystrophic changes of the skin and nails are initially visible (with
fingers), small scars after small superficial
bubbles. After a long attack on the background of swelling and cyanosis
tissues appear bubbles with serous-bloody contents. After them
autopsy reveals dead (sometimes to the bone) tissue and
usually formed superficial, nonhealing, ulcer. Her
scarring can take a long time. When joining
secondary infection develops gangrenous process. In cases
heavy course of bone resorption occurs, followed by
deformation of the fingers.

Duration of I and II stages is 3 – 5 years. If a
the process occurs on the hands or feet, you can often see
symptoms of all three stages at the same time.

In Raynaud’s syndrome, diagnosis is based mainly on complaints.
patient and objective data, as well as on additional methods
research. This takes into account inadequate sensitivity to
cold factor (first of all) and color change
affected areas. It is the whitening of the skin that is characteristic and
occurs in 78% of people with this syndrome. Recommended (British
a group of physicians studying systemic scleroderma) determine
the reliability of Raynaud’s syndrome depending on the reaction to cold
following features:

The reliability and degree of vascular lesions are also determined with
using instrumental methods: capillaroscopy of nail vessels
bed, color Doppler scanning, thermography of the affected area
(the rate of recovery of the original skin temperature after
cooling).

The final diagnosis of Raynaud’s disease can only be made.
as a result of a thorough examination. If a не выявлено других
diseases that caused the occurrence of the symptom complex,
устанавливается диагноз «Raynaud’s Disease».

With синдроме рейно инвалидность выYesется в основном в связи с
the main disease (rheumatism, scleroderma, etc.). Но иногYes,
if the patient cannot do the work associated with his
the disability is possible in connection with the syndrome
Rayno II or III stage.

Persons with Stage III Reynaud syndrome are not suitable for military service,
at stage II – limited suitable, at stage I – subject
appeal.

Providing emergency assistance during an attack consists in:

With Raynaud’s syndrome, treatment is long lasting. First
it is directed to the treatment of the underlying disease, which
caused the occurrence of the symptom complex.

Smoking should be avoided and exposure should be avoided.
provoking factors at work and in living conditions – contact with
cold air and cold water, vibration effects,
long work on a computer keyboard and with heavy
metal products, contact with various chemical
production substances, psychological stress.