The child hurts pisyun – all parents raising boys, have ever encountered such a problem. Moms have a lot of questions about male genital organ, as it causes a lot of fears.

Even in maternity hospitals, women in labor are taught the rules of genital hygiene newborns. One of the main directions regarding foreskin – less disturb her, so as not to provoke inflammation.

All boys are born with an innate physiological phimosis. The skin fold that covers the head of the penis is foreskin.

With the head of the penis, it tightly connects with thin adhesions. AT unlike adult men, this skin is motionless. Usually this the condition lasts up to 5 years.

With the growth of the boy, the gap increases and the head opens. A cavity filled with dying cells forms. epithelium.

The effect of spontaneous erections and special enzymes in the form of curd mass (smegma) that secrete sebaceous glands mucous membrane. Normal physiological phimosis is completed by 6-7 years, but there are cases of completion of the process at 3 years, and after 10 years.

Curiosity or anxiety can encourage parents to rash acts. Especially if compared with the neighbor a boy whose flesh is already open, their heir is noticeable lagging behind.

Tips from an “experienced” neighbor to discover flesh on their own and bring a child with “male” problems called balanoposthitis to the surgeon’s office. Penis head inflammation is a serious threat to the baby does not represent. Until it becomes chronic stage.

Causes and symptoms of genital inflammation 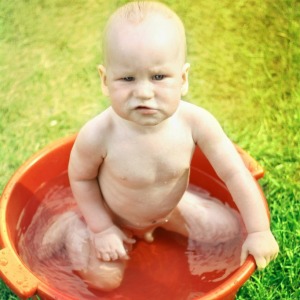 Most common the reason for balanoposthitis is the parents’ attempts to speed up independently discovery of the foreskin. They lead to infection of skin folds and the development of inflammation.

There are also physiological prerequisites for the development of the disease. When commissures diverge, smegma accumulates under the flesh.

If the head opens slowly and spontaneously, the body he is freed from accumulations, washing them with urine. But sometimes folds on the penis form a bag where it accumulates and tightens smegma.

The accumulation of curd mass leads to a violation of the exchange processes, reducing the protective function of the skin – all this creates an excellent environment for the reproduction of bacteria. Smegmolit himself does not go out when it becomes inflamed, acute balanoposthitis. Microbes can also be a source of infection. (staphylococcus, streptococcus, gonococcus, E. coli), and mushrooms (candida), as indicated by redness under the testicles in baby.

This disease occurs and is allergic in origin. The inflammatory process in the foreskin is caused by:

At risk are also children with diabetes. At this disease accumulates a lot of sugar in the urine – favorable culture medium for microbes.

Overweight boys have problems with immunity, impaired metabolism, it is more difficult for them to conduct quality hygiene. At hypothermia decreases the baby’s immune defense, this enhances the development of inflammation. Kills immunity and vitamin deficiency.

Permanent trauma of the genitals with narrow swimming trunks without codpiece with a central seam creates the prerequisites for inflammation.

Often the cause of difficulties with opening the head (phimosis) is balanostitis, relapses of which lead to the fact that extreme the flesh has such a narrow hole through which the head cannot pass the. Phimosis is eliminated by circumcision – quite simple surgery under general or local anesthesia (in depending on the age of the children). After surgery, the head of the penis always remains open and easily accessible for hygiene.

On topic forums, questions like “a child 4 years old hurts pisyun.” The symptoms of its inflammation will be itching, redness, cyanosis, purulent discharge, swelling of the head penis.

In addition to local signs, weakness, high temperature (up to 38 °), inflammation of the inguinal lymph nodes is observed. It manifests itself in completely healthy children, most often in the morning.

Symptoms appear sharply, develop quickly. If the cavity is opened and cleaned independently, then self-healing is also possible.

This is the acute form of the disease. If during urinating, the child complains of pain, appeared on the head of the penis rash and white plaque – these are signs of chronic balanostitis, which leads to cicatricial phimosis with ulcers. In this stages of treatment may be delayed for 3 months.

Most often, children under 5 years old are at risk, since they are sick 3 times more often than adults.

Methods for the treatment of balanostitis in children

For the diagnosis of the disease, in addition to examining and analyzing complaints, they take samples of discharge from the urethra and scraping from the head of the penis. The main thing is not panic: with timely treatment of balanostitis in children there are no difficulties. If the course of treatment is chosen correctly, for two days all symptoms of the disease disappear.

In addition to antibacterial ointments, use baths with chamomile and furatsilinom. In the first case, ordinary herbal tea is prepared (dining room spoon of chamomile flowers in a glass of boiling water), in the second – 2 tablets furatsilina dissolved in a glass of comfortable boiled water temperature.

During the procedures, the head does not need to be released; means and so penetrate the bag. You can do the instillation of the solution furatsilina or chlorhexidine. Under the foreskin with a syringe (10 ml) without a needle pour a warm solution prepared in a similar way.

On the Internet, where they discuss issues like “the child has pain, what to do, “they often recommend washing with a solution of potassium permanganate. When its application should not forget about the drying effect, adverse to sensitive skin.

Levomikol, clotrimazole and other ointments can be applied as compresses on a sore spot at night, fixing with a bandage, sometimes them introduced into the pocket of the foreskin. Medicines are selected only after analysis of smears, as different sources of inflammation (bacteria or mushrooms) require their own treatment approaches. Consultation is possible Obtain from a surgeon or urologist.

In severe forms of balanostitis spend antibacterial therapy, surgical treatment in the form of longitudinal dissection with circumcision of the foreskin.

Complications after inflammation of the foreskin 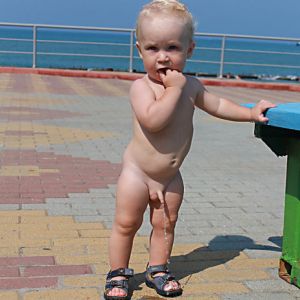 A disease can occur without bright severe symptoms, but if left untreated, there are complications very serious:

If you self-medicate or carry out procedures irregularly, do not follow the dosage of drugs, inflammation may spread to the urinary canal, over time it leads to narrowing of the urethra.

Genital curvature and deformity – not only a cosmetic defect, but also a serious psychological trauma, leaving an imprint in the mind for life.

Prevention of genital inflammation in boys

For the treatment and prevention of inflammation, an important condition for success there will be careful hygiene:

What should be the full treatment of dropsy of the testicle in the baby.

Read here how to treat diaper rash in infants.

Inflammation of the foreskin is not the most serious disease in boys. If you treat her responsibly, it is successfully treated. Teaching boys how to properly care for their genitals does not less important than girls.

Regular baths, fresh linen, a personal towel are a guarantee male child health. If a child has pain, it’s important not to allow violence when removing the head.

It is necessary that the baby fulfills all the recommendations independently and gradually. And then circumcision of the foreskin can only be done by desire.