The fifth obstetric month will come to an end very soon pregnancy, half way is already almost gone. Less and less time remains until the cherished meeting with the baby. In spite of this, the emotional state of a woman remains stable. 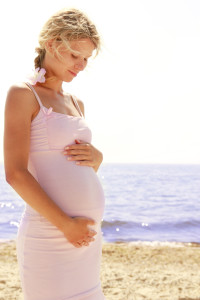 Some significant changes in Well-being of the future mother does not occur. Women can also continue to bother back pain, lower back.

This is normal and caused by uneven load distribution on the spine due to displacement of the center gravity. The uterus continues to grow and rise above the pubic articulation.

Now it is 1-1.3 cm below the navel. A couple of weeks the woman’s uterus will rise even higher, and her height will be already at a level navel or even a little higher. This can lead to protrusion. belly button out, which is also absolutely normal.

Due to the fact that the uterus is already high enough above the pubis and does not press so much on the bladder, the frequency decreases urination, which allows the expectant mother more get enough sleep at night.

At week 19, a woman needs to be very closely monitored the amount of fluid released from the body. Since the kidneys in during pregnancy work in an enhanced mode, it is important not to miss failures in their work.

If the amount of urine excreted is less than the amount drunk fluids, this may mean that the kidneys can not cope with the load. This pathology can lead to the appearance of edema, even in the second trimester, which is fraught with such a dangerous complication of pregnancy as preeclampsia.

The blood volume in the body of a pregnant woman increases, this may provoke a drop in hemoglobin in the blood. For prophylaxis in such situations it is necessary to eat meat, apples, buckwheat porridge.

Sometimes a doctor may prescribe pregnant iron supplements after 18 weeks to prevent iron deficiency anemia. In order to recognize the decrease in hemoglobin level in time, you need to know its signs:

Some women may notice that the nipples stand out droplets of a clear liquid. They are usually few, and they are not cause discomfort.

This is colostrum, which will subsequently become the very first food. your child. No need to try to squeeze colostrum.

The only measure necessary in such situations is compliance with the hygiene of the mammary glands. For these purposes, it is quite enough daily shower.

By the end of the fifth month, almost all women have already felt the joy of the first stirring of his baby. Now you need to lead counting, it is advisable to write data in a separate notebook or notebook.

During the period when the baby is active, he should push no less 4-6 times per hour. If the movements are very frequent and are more than 10 once an hour, this may indicate that the baby is missing air.

Hypoxia of the fetus is a rather dangerous phenomenon that can influence the development of the child, including the central system. If the ultrasound doctor confirms the presence of signs indicating development hypoxia, drug treatment is required.

How does the fetus change 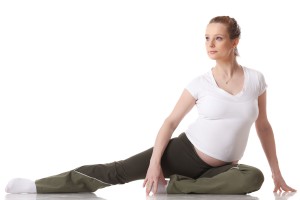 At the 19th week of pregnancy in the baby the respiratory system begins to develop, bronchioles appear. Blood supply to the lungs improves.

The brain continues to develop actively. By the end of the fifth months of pregnancy, the baby can already consciously commit those movements that he likes. He swims with pleasure in amniotic fluid, pulls the arms and legs, can yawn and to frown.

Brown fat continues to accumulate in the tissues. (mainly in the neck). Important achievement of this week can be considered the beginning of the excretory system.

Now the baby pisses in the amniotic fluid every hour. Dedicated urine is then excreted through the placenta, acting as a kind of filter.

The body length of the baby is about 13-15 cm, and the baby weighs approximately 200-250 g. At week 19, the fetus resembles an average size zucchini.

The baby already distinguishes sounds very well, reacts to his mother vote. Be sure to talk with the baby as often as possible, he likes it.

Starting from week 19, an ultrasound scan may show the presence of a disease like hydrocephalus. It is also called “dropsy brain”.

This is a condition in which a fluid washing the brain accumulates and exerts strong pressure on it. Luckily, Now there is a possibility of treating this pathology even before the appearance of the baby in the world with timely detection diseases.

An ultrasound is also necessary if there is a serious indication for it carrying out – if the doctor on the basis of examination of the patient suspected missed pregnancy.

At week 19, the pain characteristic of the fifth month persists – these are pains in the back, lower back and coccygeal zone. Can appear shooting pains in the buttocks. More is needed for prevention relax, wear a bandage and comfortable low-heeled shoes.

The uterus grows and rises higher, so it can slightly worse pain in the lower abdomen with sudden movements. She is the result of a sprain holding the uterus.

Pain in the lower abdomen is harmless only if it is not accompanied by a general deterioration in the health of the pregnant woman and changes in vaginal discharge. When painful The sensation of visiting a doctor is a must.

At 19 weeks, pain may appear during urination. AT in most cases, they indicate a possible urinary infection ways, and also can be signs of cystitis and pyelonephritis. These diseases require compulsory treatment, as they may cause serious complications during pregnancy.

There is a little more discharge than in previous weeks. They are bright, uniform in consistency, without pungent odor.

If any color or odor changes occur, or if the appearance of purulent, bloody or cheesy discharge, you need both You can quickly see a gynecologist. Such discharge means the presence of infection, which, if untreated, can greatly harm the fetus and even cause the pregnancy to fade.

Intimacy is not contraindicated at this time. Rather on the contrary – if sex gives the expectant mother pleasure, then deny yourself sexual intercourse is not worth it.

But you need to carefully monitor your well-being not only during, but also after intimacy. What are the signs consult a doctor for advice about the possibility sexual relations in your case:

At 19 weeks, pregnant women should adhere to the general recommendations. First of all, it is worth protecting yourself from stress – do not worry in vain, do not be nervous, try to keep yourself in hands in any situation.

It is recommended to listen to calm music, to walk in beautiful parks, read books, watch nice movies (best comedy genre). Limit communication as much as possible and meeting unpleasant people.

To relieve excessive nervousness, if any, will help warm bath with sea salt. You can also have a cup of chamomile tea – it acts perfectly on the nervous system, which is necessary for most women in position. If you are not allergic to bee products, You can add a spoonful of honey to tea.

Do not forget about moderate physical exertion. Special exercises will help keep the body in good shape. physical fitness, reduce pain associated with pregnancy, as well as prepare the body for an early birth.

If a woman plans to attend courses for pregnant women, then you can search them now. Such courses will help a woman prepare for childbirth, learn how to breathe properly during labor, talk about caring for a newborn. Schools for future parents there are in many antenatal clinics and maternity hospitals.

Do not forget about the regime: the expectant mother must be fully get enough sleep and relax as much as possible.

If a woman works, you need to do small as often as possible breaks during which to do small exercises for the feet (to prevent the occurrence of edema) and go outside breathe fresh air. This is crucial for warning. hypoxia in the baby! In the diet of a pregnant woman must meat, fish, liver, fresh fruits, vegetables, greens (seasonal), dairy products and cereals. Limit is worth following products: confectionery, sausages, sausages, all kinds of pickles. Refusing these harmful products will help provide the baby only with the most useful and necessary for him life activity.