It turns out that graters and knives for vegetables can carry serious
damage to health of those who have weakened body defenses, if
they do not like to thoroughly wash kitchen utensils and dishes. That is for
their own kitchen can be a source of serious diseases,
for example, such as hepatitis A.

New knives and graters were subjected to an experiment that
was initiated by american scientists from the Center for Food
University of Georgia security. Pre-infected
hepatitis A and norovirus vegetables and berries (cucumbers, strawberries,
carrots, plain and nutmeg) were cut using
grater and knife.

The results of the experiment showed that the blade of the knife is able to keep
pathogens after processing vegetables and fruits.
More than 50% of the knives and graters used during the experiment
acted as sources of the spread of the dangerous virus. Cooking
dinner, we may not even suspect that we are holding a possible
source of dangerous infection. The choice of scientists in favor of hepatitis A and
noovirus was not accidental.

The co-author of the experiment, Marilyn Ericson, states that
research findings should especially alert people with
immunodeficiency and those who have depleted protective reserves of the body.
For them, thorough washing of dishes and
appliances after meals. Also cooking should
accompanied by thorough hand washing with soap. 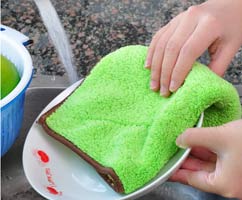 Scientists at the University of Arizona made a paradoxical conclusion – by
compared to the number of bacteria that are on sponges and
rags, the toilet can be called the cleanest place, because it
the room is often disinfected – aggressively cleaned
highly active substances. On each 2.5 cm2 kitchen sponge
there are about 10 million bacteria, and on a rag only 1 million.

According to the recommendations of experts from the Council on Hygiene
it is recommended to wash napkins, sponges and towels in water,
whose temperature is above 60 degrees. For processing sponges can
use a microwave.