Fungal diseases in humans today occupy
special place in the general infectious pathology. Most significant
spread among all human fungal lesions received
onychomycosis – nail fungus. According to many studies conducted in
in various countries, it is estimated that over 30% of the world’s population
infected with various fungal diseases, and among all species
Mycoses nail fungus owns more than 50% of them. This is a fungal
the lesion is most difficult to treat because therapy
nail mycoses should be long-term, complex, with parallel
regular antiseptic treatment of the patient’s shoes. More often
pathogens of onychomycosis are dermatophytes – they are detected
50-80% of patients with nail fungus, yeast-like fungi –
5-7%, плесневыми грибами —  9%.

Often, patients are simultaneously diagnosed immediately.
several pathogens of nail fungus, that is, laboratory methods
researches define the mixed mycoses which hard give in
local therapy. Therefore, in many clinical cases, successful
treatment of onychomycosis is impossible without the use of oral
broad-spectrum antimycotics.

The effectiveness of the treatment of nail fungus Irunin 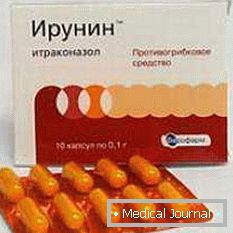 After a thorough examination of the patient, biochemical analyzes,
cultural research methods, consultations with other
specialists to determine related diseases,
A modern antimycotic can be prescribed as a dermatologist for
ingestion – Irunin, as well as its counterparts Orungal, Itrazol,
Orunit, Kanditral, Rumikoz.

This is a relatively new drug, international non-proprietary.
Itraconazole is a synthetic antifungal.
an antibiotic that has been widely used in our country since 1996.
Many studies have repeatedly confirmed it
highly effective action in the treatment of various fungal
diseases of not only nails, but also of the skin, internal organs,
vaginal candidiasis. Safety of Irunin also confirmed
in the treatment of various mycoses in people with sugar
diabetes.

According to research data after 9 months of treatment with Itraconazole,
контрольной диагностике  у 92% пациентов с онихомикозом было
full recovery is noted, and at control examination through
a year after therapy, 94% also found a complete cure.
In addition to treatment with oral antimycotics at the same time should
conduct and local therapy of the affected areas, and conduct
regular disinfection of shoes that a fungal patient uses
toenails. Without complex therapy and antiseptic
shoe activities, the use of oral antimycotics can
may not be as effective and may over time
recurrence of the disease.

Patients with nail fungus caused by various pathogens
Irunin’s treatment is recommended by the method of pulse therapy. Usually
therapy is 2-4 cycles, depending on the depth and area
fungal infection. Most patients, in case of significant
the growth of keratotic masses on the nails, before treatment should
remove infected areas, it is made either by the patient
with the help of mikospor, which is included in the set for the treatment of fungus
nails, or by a qualified expert softening method
ureaplast

For onychomycosis of the toenails, the standard therapy is as follows: one
once a day, 200 mg for 3 months, pulse –therapy – twice a
day 200 mg for 1 week per course, after 21-28 days course
repeat, you should spend from 3 to 4 courses. In the case of fungal
nail diseases solely on the hands, enough holding 2
courses, also with an interval of 21 days. Since elimination
The active substance of the nail is quite slow, so
the effect of treatment for nail fungus comes after 6-9 months
after the end of therapy.

Oral administration of Irunin is contraindicated for people with individual
hypersensitivity to Itroconazole and Irunin components. WITH
caution you can assign this antimycotic in childhood,
with concomitant diseases of the liver, with severe cardiac
failure. WITHуществует целый список лекарственных препаратов,
with which the simultaneous reception of Irunin is not allowed: simvastatin,
terfenadine, lovastatin, astemizole, triazole, mizolastine, dofetilide,
cisapride, quinidine, rifampicin, etc.

If you used Irunin in the treatment of nail fungus, please
leave your review about the effectiveness of the drug in your case, about
side effects, etc.