Representatives from the National University in Singapore
question of a person’s genetic predisposition to certain
social qualities. Richard Ebstein, a professor at the University,
together with a group of scientists determined the significant role of two genes in
This process is CD38 and CD157.

We all know people as sociable and closed.
Some like big companies, always happy to talk and have a lot of
connections in society. Others prefer solitude and indentation
own “world”. This social difference was previously explained.
features of the mental state, the accumulated experience of man.
Now Professor Ebstein told the scientific community about two
responsible genes.

About 1,500 young people were selected for the experiment.
Chinese nationality without chronic diseases. Everything
The subjects completed three questionnaires that evaluated the social
adaptation, relationship to friendship, hostility, number of friends. Earlier these
questionnaires were actively used in cases of suspected autism
little children.

As a result, Singaporean scientists identified: 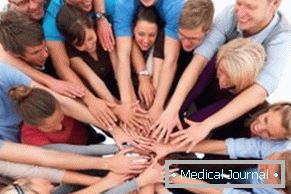 Genetic effects on adaptation processes are associated
according to doctors, with the regulation of oxytocin by these genes. But Ebstein
did not disregard the fact that increased or decreased expression
CD38 and CD157 are detected in only 15% of people. The rest are
within average values. In the following stages, specialists from
University of Singapore plan to study the effect of genes on the course
autism.