Update: October 2018 Fitolysin – a popular vegetable
a drug with a rich combination of drugs that provides
diverse therapeutic effects. Wide therapeutic
the possibilities of the drug are due to the properties of herbs and oils,
available in composition. Traditionally appointed in an integrated,
main and supportive treatment of common diseases
urinary tract and kidneys. Especially recommended for small
kidney stones and sand in the bladder.

Dosage form in the form of a thick paste is very convenient in
application: it is easier and easier to use the paste than long
prepare decoctions on the basis of medicinal fees. Pasta easy
dosed. Packing is convenient for transportation, so it can
to help out in travels, in the country and so on.

The drug is made in the form of paste, which is obtained from
oral suspension. 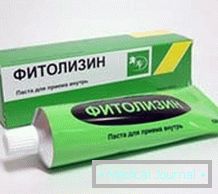 Soft Phytolysin paste has a green-brown color and
peculiar smell. Available in volumes of 100 grams. in tubs from
aluminum, in cardboard packs. Price: 320-450 rubles.

Therapeutic effects of drugs are associated with the properties of the rich.
herbal composition:

Essential oils define additional anti-inflammatory and
diuretic action. Plant flavonoids in the aggregate
contribute to the formation of microcenosis, detrimental to
gram-positive microorganisms. Saponins in the composition of the drug
detrimental effect on staphylococcus. Algukons are substances with
pronounced antispasmodic effect. Silicates activate excretion
urea and prevent the formation of stones.

The use of phytolysin contributes to softening and subsequent
disintegration of stones inside the kidneys and excretion in the form of small
conglomerates. Prevents further growth of existing
stones.

The combined drug improves filtration in
glomeruli of the kidney and does not affect the electrolytic balance. Improves
excretion of sodium and chlorine ions from urine.

Phytolysin can be prescribed as a combination therapy drug,
and independently.

Despite its natural, plant composition, phytolysin has
strict contraindications for use:

The drug is intended for internal use. To receive
dosage form 1 tsp paste dissolved in 100 ml sweetened
warm water. This dose is taken three times or four times a day. after
food.

Cases of overdose are not marked.

The pronounced diuretic effect of phytolysin requires caution when
simultaneous treatment with other drugs: perhaps
accelerating their elimination from the body.

With simultaneous use with NSAIDs, anticoagulants,
hypoglycemic drugs, drugs containing lithium,
MAO inhibitors have been noted to increase their effects. Also phytolysin
is able to prolong the therapeutic effects of phentobarbital and
paracetamol.

Phytolysin reduces β-carotene absorption in the small intestine and
α-tocopherol.

The instructions for use of phytolysin indicate that the use of
during pregnancy and lactation is not recommended due to
lack of data regarding the teratogenic effect of the components
drug and excretion with milk. Meanwhile, this particular drug
very often prescribed for pregnant women.

Urinary tract infections are one of the most frequent pathologies
which are recorded in women in the situation (up to 30% of all
pathologies). In this crucial period in the female body
optimal conditions are created for the development of urinary infections
pathways and kidneys ascending because
progesterone ureters expand. Because urinary and
the reproductive systems are located in the same anatomical region,
any pathology should be treated promptly – only this allows
prevent fetal infection and possible complications.

In the course of many years of practice, any complications in the mother and
fetus in patients taking phytolysin during pregnancy and
lactation is not marked. This is what gynecologists rely on.
urologists, prescribing the drug to women during pregnancy in
standard therapeutic doses. The only thing that follows
understand every expectant mother – such an appointment must be made
a doctor with a mandatory entry in the medical record. To do
self-medication is unacceptable!

Reviews of phytolysine for cystitis

Inflammation of the bladder is known to occur with a rather
unpleasant symptoms and requires immediate treatment, otherwise
the infection will spread quickly. High antiseptic,
antimicrobial and anti-inflammatory properties of phytolysin allow
It enhances the therapeutic effect of antibacterial drugs.
Antispasmodic and analgesic effect of herbal remedies allows
quickly relieve symptoms of burning and pain. Diuretic effect
promotes active removal of microorganisms in the urine.

However, as a drug for monotherapy of acute cystitis, phytolysin
not worth considering. Whereas for chronic cystitis
phytolysin administered during remission is excellent
prevention of exacerbations of pathology.

This drug has no analogues, completely identical in
composition. Cheap analogues of phytolysin are herbal fees, in
which included plants from the formulation.