Feeding can start in 4-4.5 months with a small amount buckwheat porridge cooked on water.

The portion is gradually increased over three weeks, at this time no need to give the child other new products for him. Replace One feeding of buckwheat porridge is possible after 3-4 weeks.

Buckwheat is one of the products that rarely causes an allergy. If a nursing mother eats porridge and side dishes from buckwheat, and the child does not have any allergic reactions, they are not will be after the introduction of the product into the diet of the baby.

If there is a tendency to allergies, it will be immediately noticeable. At the appearance of a rash on the skin or a sudden runny nose, tearing stop feeding buckwheat porridge and consult a pediatrician.

How to cook buckwheat porridge baby

Better to use the highest quality buckwheat, pure, large and fairly bright. This cereal contains maximum amount of nutrients, and it is easy to prepare for cooking porridge.

You should pay attention to the expiration date: the more time left until its end, the better. Fresh porridge, recently packed kernels will be tastier and contain more vitamins, minerals.

Buckwheat is sorted out, removing raw kernels, impurities of other cereals, specks. Then thoroughly washed, rinsed with boiled water.

If tap water is of poor quality and you are afraid to cook on it for babies, use baby bottled water, suitable for feeding newborns (this information is on packaging). If porridge is cooked on bottled water, it should be washed buckwheat. 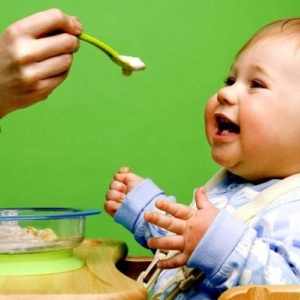 Prepared cereals dried in the oven, then ground in a coffee grinder or in meat grinder. Contact of buckwheat with leftovers should be completely eliminated. coffee, meat and other products.

The ideal option is to use a new kitchen unit. Then, when the child grows up, it can be applied directly destination.

The resulting buckwheat flour is poured with water at room temperature and cook, stirring over low heat until cooked – 25-35 minutes. The porridge is cooled to 37 ° C and given to the child from a spoon or through a nipple with large holes.

If the baby will try buckwheat for the first time, you need make it unsaturated: take 1 teaspoon for cooking ground buckwheat and 100 ml of water.

2 tablespoons of prepared cereals are placed in 300-400 ml cold water, bring to a boil, drain the water. Then buckwheat pour 400 ml of fresh water, hot or boiling, boil, stirring, until ready – 40-50 minutes.

The cooked core is rubbed through a sieve or ground in a blender. If the porridge is too thick, you can add water in which buckwheat was boiled. The optimum temperature of the finished porridge is 37 ° C.

You can use cow or goat milk. Do not cook porridge on milk mixtures, do not add them to the finished dish for baby.

For the preparation of porridge, the kernel or buckwheat made from it put flour in warm milk and simmer over low heat. until ready.

The porridge must be cooled to 37–39 ° C. Milk porridge usually start giving the baby at 7.5-8.5 months, gradually replacing it dairy-free.And you know how to introduce complementary foods baby?

What can be the reaction to strawberries in infants.

Read here when you can start giving juices to babies. 10-month-old baby can be given buckwheat porridge with a little butter, with vegetables or with meat. It’s better to add sugar and salt after the child it will be a year, then it will turn out the best complementary foods buckwheat porridge baby.