Shortness of breath – a feeling of lack of air, in connection with which there is
the need to strengthen the breath. This is one of the most frequent complaints.
patients during a visit to a general practitioner or
the therapist.

It is a common symptom of various diseases.
organs and systems of the human body – respiratory,
cardiovascular, endocrine, nervous.

This symptom can be as pathological compensatory, so
and physiological character, and its severity is often not
corresponds to the degree of pathological disorders in the body.
Multi-factorial and low specificity in many cases
make it difficult to use for the diagnosis or assessment of severity
specific disease. However, detailed and multistage
examination of the patient to determine the cause of shortness of breath is
compulsory.

What is shortness of breath?

According to the definition of academician Votchala B.E., shortness of breath – is in
first of all the patient’s sensation forcing him to limit
exercise or increase breathing.

If breathing problems do not cause any sensations, then this
the term is not used, and we can talk only about the assessment
nature of the violation, that is, breathing difficult, superficial,
irregular, excessively deep, amplified. However, the suffering and
the patient’s psychological response is not less
real.

Currently, the definition of the concept of dyspnea,
proposed by the Thoracic (Thoracic) Society of the United States. In accordance with
him shortness of breath is a reflection of the patient’s subjective perception
respiratory discomfort and includes a variety of quality
sensations varying in intensity. Its development can cause
secondary physiological and behavioral reactions and being
due to the interaction of psychological, physiological,
social and environmental factors. The following degrees are distinguished.
shortness of breath:

A more complete picture of dyspnea is demonstrated by the following
example.

Thus, the accepted definition, as well as the definition
Academician Votchala BE, treats this symptom as
psychological subjective perception, physiological awareness
or pathological stimuli and changes in the body.

A person describes shortness of breath, like pain, with a variety of colorful
emotional expressions:

Dyspnea can be both physiological, “safe” – normal.
reaction of the organism, and pathological, because it is one
from the symptoms of a number of diseases:

Physiological changes in respiration that quickly come to
rate

Dyspnea on exertion occurs even when its intensity is weak,
slight voltage. Cause dyspnea when walking
is a disease of the lungs, heart, anemia, diseases
endocrine system, nervous system, etc.

see new research scientists on the effect of heart load.

Unfortunately, very often many doctors have a mechanism of occurrence and
development of dyspnea is associated only with:

Based on these (often erroneous) conclusions
plan further instrumental and laboratory diagnostic
examinations and treatment.

However, the pathogenesis of dyspnea is much more complicated, and its causes are significantly
more. There are many assumptions about the development of dyspnea. Most
convincing theory is based on perceptions and
brain analysis of impulses entering it as a result
discrepancies in tension and tension of the respiratory muscles.

The degree of irritation of the nerve endings that control
muscle tension and transmit signals to the brain without
corresponds to the length of these muscles. It is assumed that such
discrepancy and is the cause of human perception that
breathing is too small compared to the voltage of the group
respiratory muscles. Pulses from the nerve endings of the respiratory tract
or lung tissue through the vagus nerve enter the
central nervous system and form conscious or
subconscious feeling of breathing discomfort, that is, feeling
shortness of breath.

The described scheme gives a general idea of ​​the formation of dyspnea.
It is suitable only for partial justification, for example, the reasons
одышки when walking или других физических нагрузках, так как в данном
chemoreceptor irritation is
concentration of carbon dioxide in the blood.

A large number of causes and variants of pathogenesis is due to
a variety of physiological processes and anatomical structural
units providing normal breathing. Always prevails
or another mechanism, depending on the situation that his
provoked. For example, it may occur with irritation.
receptors of the larynx or trachea, medium and small bronchi,
respiratory muscles, all at the same time, etc. However, the principles
implementation and mechanisms of dyspnea at different
The circumstances are the same.

So, shortness of breath is characterized by an awareness of excessive activation.
brain pulses from the respiratory center in the medulla
the brain. It, in turn, is brought into active state.
ascending signals due to irritation
peripheral receptors in various structures of the body and
transmitted by conductive nerve pathways. The stronger
irritants and dysfunction of breathing, the more difficult the shortness of breath.

Pathological impulses can come from:

Prove the presence of shortness of breath and establish its causes help, in
some degree, additional methods instrumental and
laboratory research. These are:

Clinical classification of shortness of breath

In practical medicine, despite the non-specificity of dyspnea, it
still treated in conjunction with other symptoms as
diagnostic and prognostic sign for different
pathological conditions and processes. There are many
classifications of variants of this symptom, indicating a connection with
a certain group of diseases. 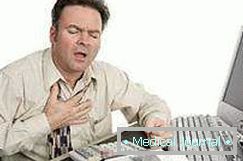 In many pathological conditions by major
to indicators, it has a mixed developmental mechanism. In practical
dyspnea is divided into four main types:

It differs from all others in that it itself is the cause
disturbances of gas exchange processes, while other types of dyspnea
result from already disturbed gas exchange and carry
compensatory character. Gas exchange with central dyspnea
disrupted due to pathological depth of breathing, frequency or rhythm,
not adequate metabolic needs. Such central
violations may occur:

In psychoneurotic disorders, complaints of shortness of breath
usually 75% of patients undergoing treatment at the clinic
neurotic states and pseudoneuroses, these are people
stress-responsive, very easily excitable, hypochondriacs.
The peculiarity of psychogenic respiratory disorders is considered to be its noise
accompaniment – frequent moaning, heavy sighs, groans.

These violations are accompanied by an unreasonable increase in the frequency
or depths of breathing that do not give relief,
inability to hold your breath. Sometimes there are false attacks.
bronchial asthma or laryngeal stenosis after any experiences
or conflicts, even experienced doctors resulting in
confusion.

Central dyspnea may manifest itself in various
options:

Tachiponoe – a sharp increase in the frequency of breathing to 40 – 80 or more
in 1 minute, which leads to a decrease in carbon dioxide content in
blood and as a result:

Deep, but rare, less than 12 in 1 minute, breathing, which
occurs when there is difficulty transporting air through the upper
Airways. This variant of dyspnea occurs:

when breathing in a dream is accompanied by stopping up to 10 or more
seconds, then with full awakening comes tachypnea.

Disturbance of a rhythm of breath on amplitude and frequency.

Shortness of breath in heart failure

One of the main symptoms of heart disease is shortness of breath.
The most common cause is high pressure in the vessels of the heart.
Initially (early stages) patients with heart failure
feel like a “lack of air” only when physical
load, as the disease progresses, dyspnea begins
disturb and with a slight load, and then at rest.

Shortness of breath in heart failure имеет смешанный механизм, в
where respiratory stimulation is of paramount importance.
center in the medulla oblongata with impulses from volumes and baroreceptors
vascular bed. They, in turn, are caused mainly
circulatory failure and blood stasis in the pulmonary veins,
increase blood pressure in the pulmonary circulation. It has
value and violation of diffusion of gases in the lungs, violation
elasticity and flexibility of stretching the lung tissue, reducing
excitability of the respiratory center.

when an increase in gas exchange is achieved due to a deeper
and frequent breathing at the same time. These options are in
depending on the increasing load on the left heart and small
circle of blood circulation (in the lungs). Polypnea при заболеваниях сердца
provoked mostly even a slight exertion
(climbing stairs) may occur at high temperatures
pregnancy, when changing the vertical position of the body on
horizontal, with the bends of the body, violations of the heart
rhythm.

This is a condition in which the patient is forced to be (even
sleep) upright. This leads to an outflow of blood to
legs and lower torso, unloading small circle
blood circulation and leading to easier breathing.

It is provoked by a violation of the respiratory mechanics of bronchitis,
pneumonia, bronchial asthma, dysfunction aperture
significant spinal curvature (kyphoscoliosis). Pulmonary
dyspnea variant is divided into:

In this variant of breathlessness, all
auxiliary muscles. It arises:

It is characterized by difficulty exhaling due to changes in the walls.
bronchial or spasm due to inflammatory or allergic
swelling of the mucous membrane of the bronchial tree, sputum accumulations.
Most часто она встречается при:

Such shortness of breath also occurs with the participation of not only respiratory,
but also auxiliary muscles, although less pronounced than in
previous version.

With lung diseases in advanced stages, as well as
heart failure, shortness of breath can be mixed, that is, and
expiratory and inspiratory when it is hard to both inhale and
exhale

This species is most rare in comparison with previous
variants, and is characterized by high frequency and depth of breathing.
It is associated with changes in blood PH and toxic effects.
metabolic products, in particular urea, to the respiratory center.
Most часто эта патология встречается при:

In most cases, shortness of breath is mixed.
Approximately 20% of its cause, despite detailed examination
patients remains unidentified.

Shortness of breath with endocrine diseases

People with diabetes, obesity, thyrotoxicosis in
most cases also suffer from shortness of breath, the reasons for its occurrence
with endocrine disorders the following:

Animi is a group of the pathological state of the organism, with
which changes the composition of the blood, decreases the number of red blood cells and
hemoglobin (with frequent bleeding, blood cancer, in vegetarians,
after severe infectious diseases, with cancer
processes, congenital metabolic disorders). Via
hemoglobin in the body is the delivery of oxygen from the lungs
in tissue, respectively, with its lack of organs and tissues
experiencing hypoxia. Increasing the body’s oxygen demand
trying to compensate for the increase and deepening of breaths –
shortness of breath occurs. Кроме одышки with anemia пациент чувствует
dizziness (causes), weakness, worsening of sleep, appetite,
headache, etc.

For the doctor is extremely important:

No less important is:

Thus, dyspnea is a symptom complex inherent in
physiological and many pathological conditions. Survey
patients should be individualized using all available
techniques to objectify it in order to select the most
rational treatment method.